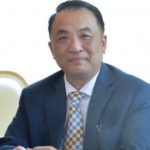 Peter started learning all major script styles of Chinese calligraphy from his father, Calligraphy Master Li Fuxing at a very young age. Peter’s Clerical script (Lishu) is deeply inspired by his father unique style called  “Fuxing Lishu”, which is known for its simplicity, vigor and elegance.

Peter has been teaching Chinese Calligraphy since 2017. He often incorporates real life examples and his personal experiences into his teachings to inspire his students. He employs a simple to complex teaching method and present his ideas in an easily understood manner.